Stockholm in the movies

Sometimes a cameo, sometimes the main character; Stockholm has played a part in many films. Most of them are Swedish, of course. But while it's quite rare to catch a glimpse of Stockholm in big-budget Hollywood productions it does show up on the silver screen, from time to time. Sometimes in quite surprising ways. Here are just some tips for any film buff to visit!

Let the right one in (2008): The Swedish vampire horror is set in a cold, dark, and wintery Stockholm: The northern suburbs of Blackeberg and Vällingby to be exact. But to ensure that the weather and snow met the demands of the bone-chilling story, most of the exterior scenes were actually shot in Luleå, some 560 miles (over 900 km) north of Stockholm.

Two of the film’s most horrific scenes were shot in Stockholm, though. Eli’s botched attack on Virginia and her attack on Jocke were filmed, respectively, at Blackeberg square and an underpass in neighboring Råcksta.

Parade (1974): French comedy-auteur Jacques Tati traveled to Stockholm for his last film, the tv-production Parade. The French and Swedish co-production stars Tati as a circus clown and was filmed at Circus on Djurgården. These days Circus is a beloved concert venue, but the 19th-century indoor amphitheater was actually built to be used by visiting circus companies.

The man on the Roof (1976): The man on the Roof, a 1976 adaptation of Maj Sjöwall and Per Wahlöö’s Beck-novel The Abominable Man, is a tense and brutal police procedural. At the time of its release, it became the biggest domestic box office success in Swedish cinema history. A title held it held until the release of Fanny and Alexander in 1982.

The rooftops of Stockholm play an integral part, almost becoming the main character, in a bloody story about a sniper bearing a grudge against the police. The sniper’s nest is located in Vasastan, in a residential building at Dalagatan 32-34 just across the street from The Eastman Institute. One of the film’s most legendary scenes, in which the sniper manages to shoot down a police helicopter, was shot at Odenplan square.

The Seventh Seal (1957): Any discussion on Swedish film will inevitably zoom in on Ingmar Bergman. Bergman’s iconic The Seventh Seal – the director’s 1957 contemplation on life, death, and religion – was shot on sound stages and locations all around Sweden. One of those locations is Skeviks grotto, a natural rock fault on the island of Värmdö. Today, the grotto is designated as a natural monument. You can visit it by hopping on any of the buses going from Slussen to Gustavsberg, where you’ll have to change buss to either the 424H or 424V.

Any Berman-aficionado visiting Stockholm should also make a visit to Filmstaden Råsunda in northern Stockholm. Bergman (as well as practically all Swedish film directors at some point or other) used the movie lot until its closure in 1969. Parts of The Seventh Seal, as well as Wild Strawberries, Persona, Hour of the Wolf, The Virgin Spring, and many more, were filmed on the premises. 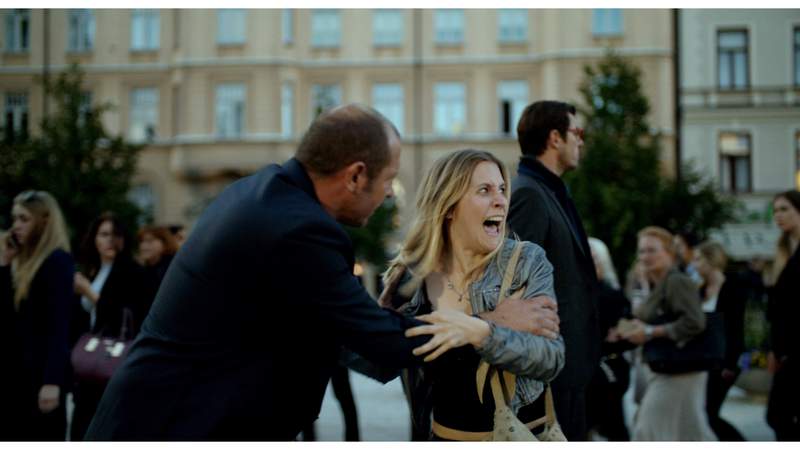 The Square (2017): Ruben Östlund’s art-world satire The Square is the latest Swedish film to win the prestigious Palme d'Or at the Cannes film festival. It’s set in an alternative version of Stockholm that is very much like the real McCoy. The museum central to the film's plot, built on top of Stockholm Palace in Old Town, doesn’t exist though. Visitors to the genuine article will quickly discover that it was added with the help of CGI.

Kiki’s Delivery Service (1989): Studio Ghibli’s coming of age film about a teenage witch is set in an animated world reminiscent of Europe in general and Sweden in particular. The buildings and streets of idyllic Koriko draw inspiration from the areas of Östermalm, Södermalm and Old Town in Stockholm, and the Old Town of Visby. Most notable is Koriko’s City Hall; the spitting image of Stockholm City Hall (with an added clock), which plays a vital part in the film’s climax.

The story goes that legendary director Hayao Miyazaki traveled to Sweden in the ‘70s, in an attempt to get Astrid Lindgren’s permission and rights for an animated feature of Pippi Longstockings. Lindgren, notoriously protective of her literary works, wouldn’t budge and Miyazaki returned home empty-handed (creating one of the big “what if’s?” in cinema history). But his European trip left a lasting impression, and he returned to Stockholm and Visby during the pre-production of Kiki’s Delivery Service.

Sunshine (2007): Technically, Stockholm plays no part in Danny Boyle’s apocalyptic sci-fi thriller. Not as itself, at least. The film is set mostly in the claustrophobic confines of a spaceship, hurtling towards our dying sun. But during (SPOILER!) the final moments of the film a snow-covered Gärdet fills in for ditto Sydney (with the famous Sydney Opera house super-imposed in the background) to sell the idea of a global winter enveloping Earth. The scene was filmed at the northwestern end of Gärdet. “Protest” – a monument by Swedish sculptor Torsten Fridh – is clearly visible in the shot.

The Girl With the Dragon Tattoo (2011): Both versions of the Stieg Larsson-adaption – the Swedish original and David Fincher’s American remake – rely on Stockholm as a backdrop for the Nordic noir-tale. Fans of the Hollywood version will surely recognize the steel bridge leading to the 19th-century building on Bellmansgatan 1; this is where Daniel Craig’s Mikael Blomkvist lives. From here it’s just a short walk to his favorite café; Mellqvists Kaffebar at Hornsgatan 78.

The Prize (1963): Paul Newman stars as Nobel Prize laureate Andrew Craig in the cold war-thriller The Prize. Craig befriends doctor Max Stratman (played by Edward G. Robison) during his visit to Stockholm, and suddenly finds himself in the middle of a Soviet conspiracy. Something of a trip down memory lane, the film features many Stockholm locations. Like the Stockholm Concert Hall, Humlegården, and Grand Hôtel. The film also has a dizzying action scene filmed at Katarinahissen on Södermalm, a famous viewpoint and the location of the restaurant Gondolen.