Have a bite of Nobel cuisine

Would you like a taste of the Nobel banquet? Here are the Stockholm restaurants and cafés run by chefs that have worked at the prestigious event.

The Nobel banquet is without question the most famous dinner party in Sweden. On the 10th of December each year, Nobel Prize laureates, prominent scientists, politicians, dignitaries, and royals gather for an elegant three-course dinner out of the ordinary.

The first banquets, in the early 20th century, were relatively modest affairs with some 130 guests. A modern Nobel dinner is a far more complex undertaking. Roughly 1300 guests are seated in the Stockholm City Hall, while the whole world is watching via satellite. Seeing servitors carry starters, mains, and desserts out to the tables of the Blue Hall is like watching a carefully choreographed dance performance. And being in charge of the menu has become a badge of honor among chefs and patissiers.

Besides the individual chef’s sensibilities and philosophy, the menu often highlights Swedish flavors and cooking methods. The meals also reflect the society and times that formed them. In 1947, for example, diners were treated to a menu that would probably seem banal in today’s world of Instagramming foodies: Sandwiches, chicken with bacon and onions, and apple cake with vanilla custard. But for post-war Europe, still recovering after a devastating war, it was perhaps a reminder of simpler times and beloved flavors. Twenty years later, in the late ‘60s, avocado found its way to the menu two years in a row. Today you’d have to go out of your way to not find a café serving avocado toast, but back then the large berry (sic!) was a new and exotic addition to Swedish store shelves. And in light of how climate challenges and sustainability have become integral to everyday life, it’s no wonder that 2017’s dinner guests were treated to an entirely vegetarian entrée: Pressed and dried Jerusalem artichoke, served with kohlrabi flowers and flavored with ginger and lightly roasted cabbage broth. 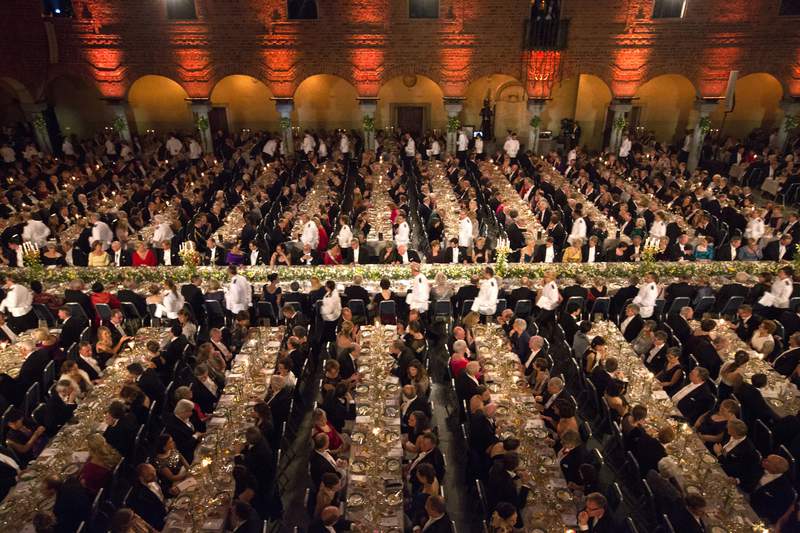 Anyone wanting a taste of Nobel dinner-worthy gastronomy is in luck. Several of the celebrity chefs work – and own restaurants – in Stockholm. And if you book in advance, there are even ways to eat your way through an entire Nobel menu.

There are two more restaurants in Stockholm that any Nobel aficionado should know about. Den Gylldene Freden in Gamla stan served their first hot meals in 1722. Almost 200 years later the restaurant was bought by artist Anders Zorn, who after his death left it in the care of the Swedish Academy. The food is typically Swedish, with timeless stalwarts of Swedish cuisine, and it's been said that the winners of the literature prize are often decided over pea-soup at the Academy's traditional Thursday luncheons.

If you're keen to eat the actual Nobel dinner you'd probably want to have dinner at Stadshuskällaren, the restaurant at the Stockholm City Hall. In fact, the head chef at Stadshuskällaren was in charge of the menu för the banquet up until 1996. Diners can book a veritable feast with any past Nobel menu, as long as the booking is made at least one week in advance and the party is 10 people or bigger.

Food is only a part of the celebrations on the 10th of December. Learn more about the careful planning of the banquet at The Noble Prize Museum and the exhibition The Nobel Prize banquet – behind the scenes. You'll meet its past chefs, florists, bannermen, and the designers behind some of the most eye-catching gala dresses seen through the years.

A sustainable vacation in Stockholm

A sustainable vacation in Stockholm

My favorite summer hangouts in Nacka

My favorite summer hangouts in Nacka

Stockholm on a budget

Stockholm on a budget

The romantic side of Stockholm

The romantic side of Stockholm