A day trip with the commuter ferry

Jump on a boat and explore the surroundings of Stockholm. Local resident Ingalill Massiani's favorite day trip includes everything from a castle to a café. All you need is a valid SL ticket and comfy walking shoes!

Ingalill Massiani moved to Stockholm in 1989. She's had a strong interest in exploring her city to the fullest ever since. On a cloudy summer day last year, her curious mind took her and her friend to the end destination of the commuter ferry, with the intention to explore a part of the Stockholm surroundings where they've never been before. Their goal was to visit the acclaimed Kanaan's café. They stumbled upon several surprises worth visiting along the way.

If you wish to do the same excursion, expect to spend at least half the day and put on your most comfortable shoes – there's going to be a lot of walking!

The journey begins at Klara Mälarstrand in central Stockholm, close to the City Hall. Embark the commuter ferry's line 89 and go all the way to Tappström. It's a 45-minute ride (an extra 30 minutes during wintertime) and is the same price as a regular subway ticket.

– Taking the ferry somewhere is definitely my best Stockholm tip. All you need is a valid SL card. As a bonus, you get to enjoy the fresh air and to see Stockholm from the water. On this tour, you'll have plenty of time to watch nature and wildlife. Drottningholm Palace is also visible from the boat, says Ingalill Massiani.

At Tappström, on the island of Ekerö, take one of the many buses towards Nockeby. Jump off and start walking along the waterfront in a northwest direction. There are no signs, but if you look up Kanaan's trädgårdscafé in Google Maps, you'll see in which direction you should go. Depending on your walking pace, you'll reach the first sight in approximately 45 minutes: The Castle of Ljunglöf (Ljunglöfska slottet).

Built to be a summerhouse for the Swedish "snuff king" Knut Ljunglöf, this villa soon became known as The Castle of Ljunglöf among the locals. With a gilt leather dining room, impressive stuccowork, stained glass windows, and wood paneling stretching over four floors, it sure was a home worthily a king – or at least the owner of the largest snuff fabric in the world at the time.

In 1893, the house with its continental Spanish-Portuguese exteriors, surrounded by palm trees and agave plants, was move-in ready. Knut Ljunglöf enjoyed several summers at the premises until he passed away in 1920. Today, the castle is a popular destination for weddings and conferences. It's not open to the public.

– You can't walk inside the castle, but it's idyllically located by the water. The park area has several beautiful buildings just worth looking at from the outside, Ingalill Massiani says. 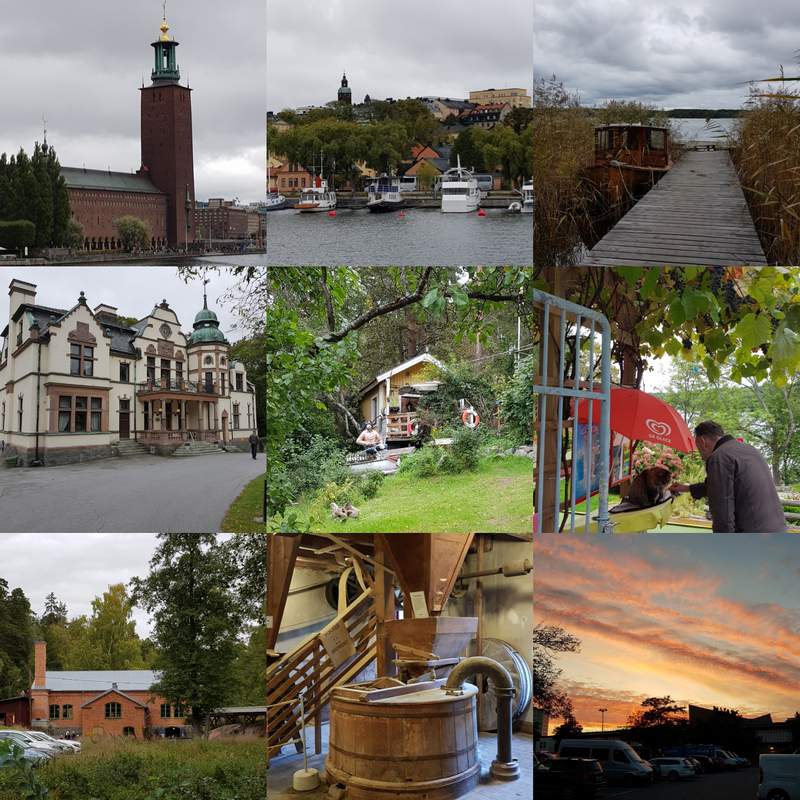 A short stroll from the palace along lake Mälaren awaits the next attraction, a mill called Kvarnvikens karn. Built in 1883, the mill was considered very modern thanks to its water turbine. It was owned by nobody less than the snuff king himself, Knut Ljunglöf. He used the mill to grind grain for his nearby farms.

Since 1984, Kvarnvikens kvarn is a museum and currently the oldest functioning mill in Stockholm. The opening hours are limited to a few days every summer, being May 10 and 24, August 30, and September 13 and 27, in 2020. On these days, visitors can purchase freshly grounded flour made on organic grain.

After taking a tour around the museum, head towards the road called Kanaan's väg. You'll pass by a mini-golf and the beach at Kanaanbadet. The last stop on the trip awaits; Kanaan's trädgårdsafé. A year-round open garden café in the Grimsta nature reserve, and listed by The White Guide as one of the 101 best summer cafés in Sweden 2019.

– It's incredibly beautiful! The girl at the cash register was exceptionally nice and the cookies, which we thought were had deserved after the long walk, tasted amazing, says Ingalill Massiani.

Kanaan's café is open for lunch and fika every day. During the summer months, you can enjoy a barbeque buffet and live music in the green garden while looking out over the blue lake.

The closest subway stop for going back to Stockholm city is a two-kilometer long walk from the café. Who knows, maybe you'll stumble upon some more surprises to add to your own adventure.