The haunting of Stockholm

Ghastly moanings and mysterious knocks, strange sightings, and even physical altercations. With an abundance of medieval churches, old mansions, and historic buildings, Stockholm has a lot of stories about things going bump in the night. "I would say it’s a solid 8 on a haunting scale of 1 to 10", says author, journalist, and ghost story collector Petter Inedahl.

At the northern end of Drottninggatan, central Stockholm’s main pedestrian artery, you’ll come across an unassuming light yellow 18th-century mansion. In a town full of historical buildings – in all shades of yellow, red, and brown – this particular building, may seem like one of many. By the look of its courtyard, closed off by a wall and gate of 9 feet bars, you might think this building houses a government agency, maybe an upscale lawyer firm or medical institution. And actually, it’s owned by the University of Stockholm, so you’re not far off.

This is Schefflerska palatset, the Scheffler Palace. And on a beautiful day, the nearby park looks like a nice enough spot for a walk or lunch. There are, however, reasons to be wary of its serene surroundings. During its 300-year history, the Scheffler Palace has become a hotbed for unexplained phenomena, giving the building its sinister nickname; The Haunted House on Drottninggatan.

Glass and mirrors cracking for no apparent reason, strange music and sounds being heard at night, incorporeal shadows and shapes stalking the hallways. There have long been rumors of both vast treasures and frightening secrets hiding in the building’s walls and under its creaking floorboards. And as it happens an unmarked grave was found and exhumed in the garden, in 1907.

Supposedly the disturbances got so bad at one point that a priest was brought in to perform an exorcism. Before he could finish the ritual he was flung out through a window on the second floor, breaking his leg in the fall, somewhat similar to Father Karras's gruesome fate at the end of 'The Exorcist'. 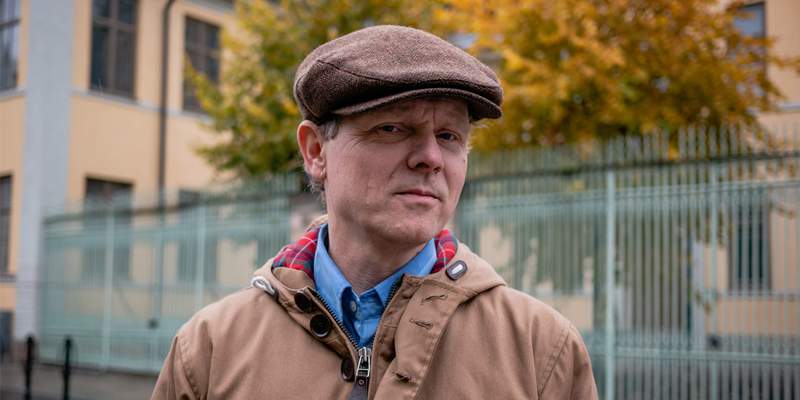 "That particular story though", says author and journalist Petter Inedahl, "predates the movie by some 200 years. When a building has people consistently living and working in it, for hundreds of years, these kinds of rumors pop up. From the old tales up to recent times. There’s, for example, a fairly recent story about a woman writing on a computer in her office. The woman left her desk for a while and when she returned she noticed that somebody, or something, had continued writing letters with the keyboard".

Being something of a scribe of ghost tales, the former journalist Petter Inedahl has visited some 250 haunted places – many of them in Stockholm. He’s collected the stories – both told to him by firsthand witnesses and found in historical archives – in two books and hosts a podcast on the subject; "Hemsökta platser".

"It’s more ingrained in cities like London or Paris, more accepted. But there are lots of ghost stories in the Stockholm area as well. I would say it’s a solid 8 on a haunting scale of 1-10".

Unsurprisingly, the oldest part of Stockholm, i.e Old Town, has also been the nexus of strange occurrences throughout history. There are the ghosts of Stockholm Palace; sometimes a white-robed woman or a gray-clad man, other times a freakishly twisted face peering out through the castle windows. There’s the basement of Grågåsen Café, with its unexplained temperature drops and kitchen staff refusing to work alone at night due to the unnerving feeling of being watched. There are the old buildings at Köpmannagatan – one, if not, the oldest street in Stockholm – haunted by strange noises, thumps, and attic ghosts.

And there’s Riddarholmen Church, the final resting place for many of Sweden’s royals.
"I spoke to an electrician, who was part of a crew doing the sound and lights for the summer concerts in the church", says Petter. "One evening, as they were making preparations for the next day’s concert, the crew heard loud banging noises. Everybody started looking for the source of the sounds, echoing through the church. Finally, they discovered that the banging was seemingly coming from behind a locked steel door, leading down to the crypts. As the noises continued from behind the door, the crew decided that maybe it was time to call it a night and go home..."

Old Town’s age is only a part of the reason for the area's supernatural activity, says Petter. People have lived and worked there for hundreds of years, as they have in the Scheffler Palace. It’s also a small, compact, part of Stockholm. So naturally, superstitions and rumors have surfaced. Other than that ghost stories don’t operate on any logic, age, or otherwise. In fact, explains Petter, if a haunting happens for no discernible reason, chances are that the person telling you about it is describing the events as best they can, not spinning a yarn.
"I’ve heard stories about new residential buildings, gas stations, and office buildings located in suburban business parks. Real-life ghost stories don’t have any point, no story-arch, that’s how you recognize them. In movies, they find a skeleton in the walls, and the specters disappear. But in real life, nobody knows why a place seems haunted".

Since Sweden is by and large a secular nation you might think that most Swedes would scoff at tales about visits from beyond the grave, dismissing them as superstition. But in Petter Inedahl’s experience, they are plentiful in Stockholm alone. It has more to do with an inherent human spirituality, than any religious creed.
"The church has never encouraged these kinds of superstitions, even wanting to monopolize on their own. But they’ve always been around. I guess it stems from the basic belief of humans as consisting of two parts; a physical body, and a spiritual part that keeps on living when the body has passed away".

Still, says Petter, firsthand accounts of paranormal events have often been dismissed as nothing more than delusions. Alcohol -and drug-induced visions at best; symptoms of an impending nervous breakdown at worst. This, in turn, has kept them from being passed on, forgotten. People have been more open to sharing their experiences in recent years, though, albeit anonymously.

Do their stories scare you?
"Sure. Ghosts are supposed to be unsettling. A ghost that isn’t scary is frankly pointless. It’s like a toy gun that only fires a small flag that says 'BAM!'. You don’t want ghosts to be too scary, though. I’ve done some research-work for various old hotels and manors; talked to the staff, looked over old archives and writings. And while they want to have exciting stories to tell their guests, they’re quick to point out that the hauntings happen in the dining hall or kitchen, not the rooms. The rooms are totally fine and ghost-free".

Any stories that you've found particularly disturbing?
"Well, I inherited a beer-stein from my grandmother that was supposedly haunted. I was kind of looking forward to seeing if it was otherworldly and kept checking up on it at night for some time, perhaps to debunk any rumors. But at the same time, I found myself thinking 'okay, but what happens if something strange does happen. What happens then?'. In the end, I didn't experience anything. The first time I spent the night in a haunted mansion, a manor in Knivsta, has also stuck with me. Again, not that I actually saw or heard anything strange. But I remember sitting and talking with the owners in the evening when suddenly, they wanted to turn in for the night and started showing me how the locks worked. It hadn’t dawned on until then that they actually lived in a smaller house a mile away and that I was going to have to spend the night alone".

Do you believe in ghosts yourself, then?
"Honestly, I don’t know. I’ve visited some 250 haunted places, even spent the night in a few. But I’ve never had any strange experiences myself. I mean sure, you can lie to a reporter, but I tend to spot those cases pretty quickly".

The point, for Inedahl, isn’t to prove someone right or wrong, though. He’s more interested in the stories themselves and passing them on, having a general interest in dark culture history. In fact, iron-clad proof that regular visits from the netherworld do occur would kill their mystical allure.
"If someone would be able to prove, with one hundred percent certainty, that ghosts do in fact exist, that they’re as natural as electricity, I would most likely lose interest".

Visit these places – if you dare

The Scheffler Palace, i.e The Haunted House on Drottninggatan is not open to the public. Here are some haunted places that you actually can visit. If you dare, that is!

More scares in Stockholm
Stockholm offers more than spooky old churches and castles for the horror aficionado though. If you're keen on spending Halloween in Stockholm, hands down the spookiest holiday of them all, you might want to check out Gröna Lund's Amusement Park and their popular Halloween celebration. The whole park gets a scary make-over with unique Halloween-themed attractions and monsters roaming the park, trying their hardest to scare the bejesus out of its guests. Another annual event is the somewhat more family-friendly Shockholm Halloween Parade. And if you're a sucker for horror films or books Science Fiction Bokhandeln in Gamla Stan and Stockholms Science Fiction Antikvariat on Södermalm are full of terrifying movies, books, comics, and games to experience in the safe confines of your own home.