With companies in Stockholm crying out for global talent, there’s ample opportunity for the world’s brightest minds to relocate to the city. And the good news is, the many perks of living in Sweden’s capital don’t just apply to the Swedes. International workers can also enjoy the benefits of life in Stockholm, from generous parental leave and a world-class healthcare system to a famously healthy attitude to work/life balance.

While Stockholm may have garnered a reputation as a leading tech hub, there are plenty of opportunities for professionals with nearly all backgrounds. From companies in the creative industries seeking fashion designers, games developers and music producers, to automation companies requiring robotics engineers and researchers, the fact is there simply isn’t enough homegrown talent to go around.

We spoke to Spotify’s Alexander Westerdahl and Karolinska Institutet’s Robert Harris to find out what makes international talent so critical to their organisations.

Today, Spotify is the world’s most popular audio streaming subscription service with 320 million users, including 144 million subscribers, across 92 markets. The company - one of Stockholm’s five unicorns - employs roughly 2,000 employees in Sweden alone, with the ambition to hire a further 400-450, as well as 40 summer interns, over the coming year.

“We are growing a lot. Just finding the talent requires us to look outside of Sweden’s borders, because we don’t always have the talent here,” says Alexander Westerdahl, Consumer and R&D HR Lead at Spotify.

While access is key in Spotify’s global hunt for talent, Westerdahl is quick to add that it’s not the only motive. The company sees diversity as its not-so-secret weapon for ensuring it remains ahead of the curve.

“We are convinced that diversity fuels innovation, and we are leading innovation within the audio streaming market. For us to continue doing that, we need diversity. We’re building a global product, hence we need people from all over the world to build it.” 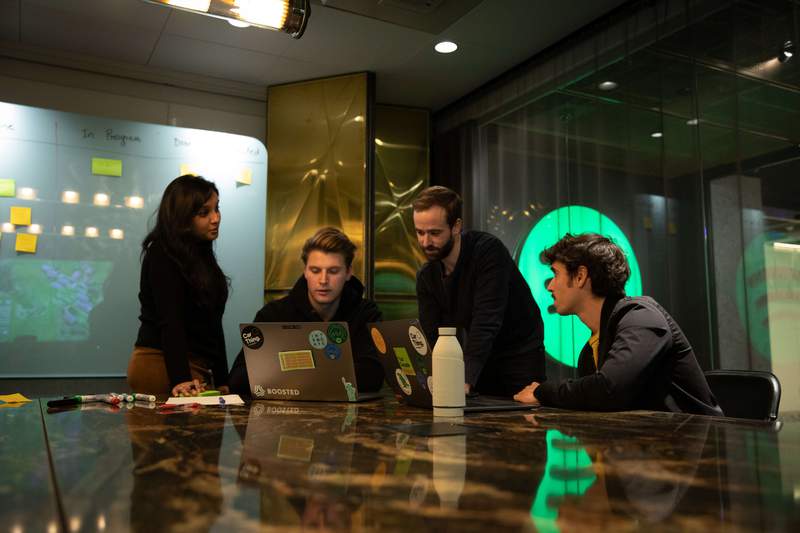 One might assume that not being able to speak Swedish would present a barrier to landing a job at Spotify’s Stockholm office. But with English as the company’s internal language, as it is at many of Stockholm’s global companies, this isn’t a requirement. What’s most important, says Westerdahl, is an applicant’s “culture add”, experience and potential. And for those who do land a coveted role, there’s support in place to make the relocation as smooth as possible.

“We look at what you add to our culture, what you’ve achieved in the past and what you can achieve in the future. We relocate a lot of people to Sweden and we assist with the relocation, of course. We help them with visas and to find accommodation and get set up. Many individuals relocate with families, so there can be a lot to juggle. So we want to help out and make that transition as smooth as possible.”

‘There’s no better place in the world’

Karolinska Institutet is one of the world’s leading medical universities with around 6000 students - 26% of which are international. The university offers nine global master’s programmes and one bachelor’s programme as well as PhDs and postdoctoral research opportunities in medical science - all conducted in English and open to applicants from around the world.

Robert Harris, academic vice-president of doctoral education at Karolinska Institutet, is himself part of Stockholm’s international workforce. Originally from England, he relocated to Stockholm over 28 years ago and says he still doesn’t look back.

“Stockholm is an extremely attractive place to be. The air is clean, there’s nature everywhere, the healthcare is fantastic and the childcare system is wonderful. There’s no better place in the world."

He’s particularly impressed, he says, by the motivation of the international students at Karolinska Institutet. Their dedication does more than drive them to do well, it contributes to the overall success of the university.

“That’s a fantastic thing for us as an employer, because you get people who really want to take that chance. We get very high quality postdoctoral students and that’s great for research and makes it a joy to be their supervisor.”

Like Westerdahl, Harris sees diversity as integral to innovation. With internationalism comes a more assorted set of ideas which makes both the research and the community much more exciting.

“Research is all about collaboration. It’s optimal when it’s international and now you can collaborate digitally with the whole world. But it’s important that it’s international here at Karolinska Institutet too, it becomes more interesting and dynamic. If everyone is made in the same mould then it’s boring.”

While various funding options are available, often depending on the student’s country of origin, what is universal is that students are counted as employees once their programme commences. This grants them access to the same rights enjoyed by Stockholm’s other professionals in terms of perks like healthcare, social insurance, and legal advice.

It also brings them firmly into the fika fold, introducing them to what is arguably the most Swedish - or at the very least the most delicious - perk of all.

“Fika is like an elevenses coffee break. This social interaction is very important here in Sweden, so it’s a great thing for foreigners to adapt to.”

Keen to take the next step in your quest for knowledge about life in Stockholm? Click here to find out why Stockholm’s international workers are choosing to make the city their home.

Sophie Miskiw is a freelance writer who has lived in Stockholm since 2016. Her varied career has spanned writing features for British magazines, content creation for global brands, and heading up the commercial department at a news network. She loves the creative atmosphere in Stockholm and that you're never far from nature, especially in summer when you can explore the archipelago and are almost encouraged to take four straight weeks off work!

Go to profile
By Sophie Miskiw

Sophie Miskiw is a freelance writer who has lived in Stockholm since 2016. Her varied career has spanned writing features for British magazines, content creation for global brands, and heading up the commercial department at a news network. She loves the creative atmosphere in Stockholm and that you're never far from nature, especially in summer when you can explore the archipelago and are almost encouraged to take four straight weeks off work!

By Invest Stockholm in collaboration with The Local
Stockholm's suburbs: the secret to finding 'home'