27 handy apps to use in Stockholm

Although there’s nothing wrong with carrying around a guide or a map, many prefer a smartphone as the go-to companion on their travels. Especially the tech-savvy Swedes themselves. Here are some smartphone apps that will make your stay in Stockholm easier.

Google translate
Swedes are generally known to speak excellent English, so asking for directions shouldn’t be a problem. Street signs and posters might still be in Swedish though, and that’s where Google Translate offers some assistance. Either write the words you see, use your phone's microphone or take a picture with the camera to get an instant translation.

Brick
Is your phone's battery drained after a day of exploration and sightseeing? Find a portable phone charger with Brick's power bank-rental service. The company has set up several rental boxes in central Stockholm and the in-app map guides you to the nearest available charger.

The app is free and available for both iOS and Android phones but features in-app purchases.
Brick on iOS
Brick on Android

ToaSverige
If you gotta go, you gotta go! ToaSverige is a guide app that helps you find the nearest public toilet in Stockholm. The toilets are admission-free and the app also lists the most popular ones, user reviews, and lists when the toilets were last cleaned.

SL - Reseplanerare och biljetter
One of the easiest ways to get around Stockholm is its public transportation system, which in turn makes the official travel planner app one of the handiest. Plan your excursions around town, discover alternate routes, and see which connecting buses or trains you need to take. You can also use the app to buy your tickets.

Stockholm eBikes are by far the most affordable – and perhaps the smoothest – way to get around in the city center. Use the app to find and unlock your e-bike. After 90 minutes, you must either leave it in one of the designated parking areas or pay extra to extend your trip. You can park and lock the bike anywhere during your trip using the app.

Easypark
Parking app that automatically shows which zone you are in and thus how much to pay. If you need to extend the parking, you can do so directly on your mobile. Works with Swedish mobile payment service Swish.

Trafiken.nu Stockholm
Car-borne? With the help of trafiken.nu app you can, when traveling in Stockholm, update yourself on the traffic situation before you embark on the roads. For example, you may receive notifications on your mobile about traffic disruptions in the areas and during the times you choose.

Taxi-apps and ride-sharing
Stockholm has several taxi companies operating, and many of them offer apps for a simpler way to book a car. For an alternative to regular taxi travels Uber and Bolt also operate in Stockholm.

All these apps are free to download but booking a ride is of course not. For more info on pricing please visit the respective websites.

Travis
Travis is a travel companion app listing several modes of transportation. Find an electric scooter near you, a bike rental, or see where you can find the nearest subway station. You can also buy tickets for Stockholm's public transportation directly in the app.

Karma
Do you want to save money and make a contribution to the environment? With Karma, you buy affordable leftover food from restaurants and cafes that would otherwise have been thrown away.

Keyflow
A night out on the town? The Stockholm-based Keyflow collects events and club nights in one place to help you discover the city’s nightlife. The app also helps you to buy tickets to any clubs or events that might require admission.

The app is free and available for both iOS and Android phones.
Keyflow for iOS
Keyflow for Android

Meetup
Want to meet some new friends? Meetup is an app where you can meet people with similar interests. It could be going to a concert together, doing a language exchange, or just meeting and hanging out in a park!

The app is free and available for iOS and Android.
Meetup for iOS
Meetup for Android

Go Jauntly
Go Jauntly is a social walking app where you curate your own walks, discover new areas to explore, and can share your experiences with friends in a fun and visual way.

Stockholm County Nature Map
Short texts and clear pictures from the nature reserves and national parks in Stockholm County. The app makes it easier to find green areas to visit. The maps show where the area is located as well as information about what you can do once you're there.

Viewranger
If walking is your preferred mode of transportation this should be right up your alley. Viewranger leads a double life as a social platform. Not only does it help you find hiking trails near you, but users can also post trails of their own.

Go City Stockholm
GoCity Stockholm is not so much an app, but instead, a digital ticket downloaded to your smartphone. You'll get entry to 40 of Stockholm's most popular museums and attractions for a fixed price, including Fotografiska, The Vasa Museum, and The Royal Palace. Included in the pass are also tickets to various guided tours and activities.

Artworks
Artworks help you find galleries, exhibitions, and public art near you. You can create an account to get updates from your favorite galleries and exhibitors and if you’re actually looking to buy art, Artworks helps you find pieces for sale.

The app is free but currently only available for iOS phones.
Artworks for iOS

Salta Friends
Salta is a guide -and social media app designed to help people with accessibility challenges to find events and activities in Stockholm. The app also has a calendar and event function, enabling you to easily organize events and meetups with your friends.

Guide U
A guide app dedicated to the rich history of Gamla stan (the Old town) with several audio tours to choose from while exploring the old streets and buildings.

The app is free to download, but unlocking the tours costs 20 SEK each.
Guide U on iOS
Guide U on Android

Spotted by Locals
Spotted by Locals is a community-driven guide app where handpicked locals offer up their own favorite spots and hangouts in Stockholm. If you want personal recommendations that might be off the beaten path, this might be the app for you.

Questadore
Enjoy a gamified trip to Stockholm with Questadore, an app that doubles as a guide and game. Chose from a variety of quests; some aimed at tourist guiding or puzzle-solving, others presenting a physical challenge, deciphering the clues to find the next location on your quest, and earning points.

navDock
navDock is a guide app suited for seafarers or archipelago explorers. whether you're looking for a great restaurant, café, or grocery store in the Stockholm archipelago. navDock also lists floating gas stations and includes digital sea charts of Stockholm's waters.

The app is free and available for both iOS and Android phones.
navDock on iOS
navDock on Android

Be your own guide 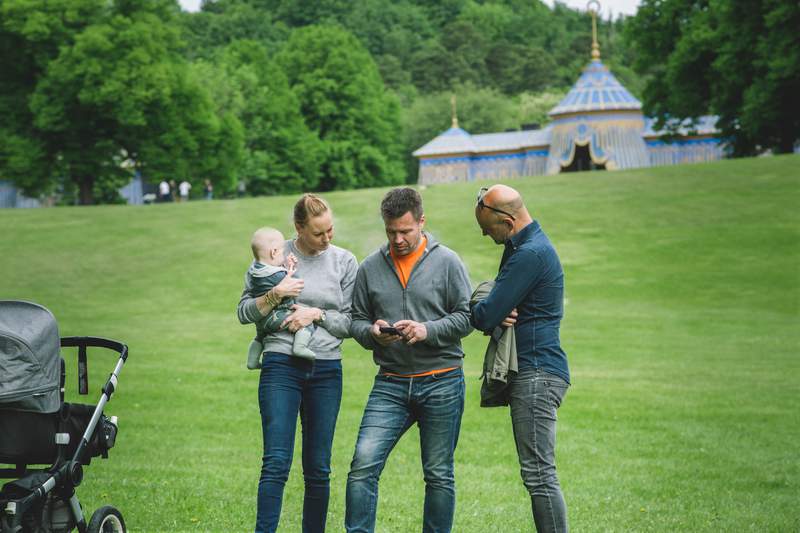 Looking for a self-guided tour for your phone or tablet? You'll find several in Stockholm, both for the history buff, like Royal Walks or Guide U, or with a pop-culture slant, like the Millenium city walk. Read more in our guide about self-guided tours!

Have a sustainable stay in Stockholm

Have a sustainable stay in Stockholm

To and from the airports

To and from the airports